Reading the increasing velocity of articles written on the topic over the course of last year, ‘viewable impressions’ has displaced ‘ad verification’ as the hot delivery topic in the adtech industry for 2013. But when you start to consider how the media consumption habits of internet users are changing, does trying to determine which approach is the most accurate in identifying whether ads are being served within a viewing pane really going to matter in the near future?

Consumers are spending a growing amount of time on social networks- more than any other category of sites on the web and as such are becoming accustomed to a content consumption experience that differs from typical website content management systems. The traditional web page is an adaptation of legacy print media which pieces together multiple columns of static content with blocks of ads in a portrait layout. Led by Facebook’s News Feed, social networks are popularizing a different approach that displays standardized units of content, in the form of text, links and images, from a user’s social graph in a single column that updates with new information in real-time.

The pace of adoption of mobile devices is furthering the spread of this stream-based approach to presenting content, as digital media companies attempt to package all of the information embedded on a traditional web page into a mobile app or website which is limited by the smaller screen sizes of smartphones and tablets. An early example of this has been Atlantic Media’s launch of Quartz in September, which is a digital only business media property built specifically for the mobile web that just announced that it has already reached 1.4 million unique visitors as of December. 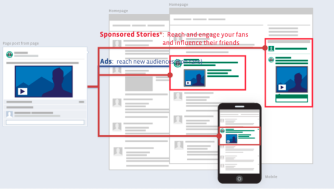 The reason the adoption of a new digital consumption experience matters to the viewable impressions conversation is in how the content and associated ads are being presented to users. Both Facebook and Twitter have shown how this combination can work in the age of social streams and mobile devices with Sponsored Stories and Promoted Tweets respectively. Both ad units are integrated into the content feed from a look and feel perspective and targets users based on their social graph relationships. The ad units themselves can be fixed in the flow of the content stream, moving down the page as the feed refreshes with new updates, or fixed at the top of the feed. In either case, since the content cascades down from the top of the app or web page the ad is always being presented, and thus seen, in the user’s viewing area.

The stream-formatted approach to content presentation is also starting to make its way on to traditional digital media websites like ESPN which launched the beta of its SportsCenter Feed in September. ESPN, which has traditionally been an early adopter of digital technologies and experiences, is taking a similar approach as Quartz in delivering a real-time, ad-supported, news feed with the added capability to consume subsets of the stream via content-specific tabs as well as the ability to add skins to the background that further promote the content sponsor.

In all of these stream examples, the ad creative is muted compared to the typical bright and flashy ad unit and consists of a single advertiser. So what the advertiser loses in ‘wow’ factor (or ‘ow’ from the user perspective) with a traditional ad experience is made up for in relevance (hopefully) and singular attention by not having to compete with other advertisers on a page and by being presented front-and-center to the user- ensuring the ad is seen. As the real-time news feed approach to presenting media proliferates, it will alleviate the need to utilize delivery verification services for viewable impressions for digital media entities adopting this new approach.

Remember, it wasn’t that long ago that the adtech industry was consumed with a different delivery issue- ad verification, with the likes of AdSafe Media and DoubleVerify raising over $50 million combined over the course of 2010-2011 to build a business around solving for this issue. In 2012 both AdSafe and DoubleVerify replaced their CEOs while AdSafe also underwent a rebranding as ad verification became commoditized at the ad server level and smaller problem, especially related to premium content publishers, than the industry led everyone to believe. Let’s not go through this again with viewable impressions.