Facebook’s first earnings announcement as a publicly-traded company last week was not well-received by investors, as the company’s stock hit new all-time lows after only being able to meet analysts’ already lowered financial expectations.

Most of the discrepancies between Facebook’s growth trajectory and stock performance can be summed up in these two slides from the company’s earnings release: 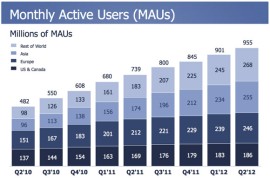 While directionally these charts look good, going up and to the right, a closer look reveals a growing problem in the relationship between Monthly Active Users (MAUs) and Average Revenue Per User (ARPU). The MAUs chart shows quarter-over-quarter user growth in each of Facebook’s four geographic regions over the past two years. The largest of these regions, Rest of the World, is growing the fastest though (at 9% over last quarter) while US & Canada, which is the smallest region in terms of MAUs, is growing the slowest (at 2%) which is an issue since Facebook is able to monetize US & Canada users over seven times better than Rest of World users on average according to the ARPU chart. Optimizing per user monetization is further exacerbated when you consider that growth is increasingly coming from mobile-only users where advertising is still in its infancy.

Facebook’s ability to attract and monetize a large U.S. audience is what has enabled the company to go public. Whether Facebook becomes a successful publicly-traded company will rest largely on how quickly it’s able to reduce the ad monetization gap between U.S. users and every other region of the world. Until then, the financial markets will continue to recalibrate Facebook’s valuation (downward) to reflect the realities of the company’s current revenue capabilities.

This situation isn’t unique to just Facebook though. For example Twitter, the second largest social network out there, recently passed the 500 million account mark according to analyst group Semiocast, which also saw the proportion of U.S. user accounts decline relative to the rest of the world since the beginning of the year and identified Jakarta, Indonesia as the most active tweeting city- statistics that have a similar looking trend to what Facebook has experienced, growing but mostly in less mature advertising markets. As any free consumer tech services starts to grow quickly, they too will eventually face this same situation.

If you’re fortunate enough to be involved with such a consumer product that is gaining millions of users, focus on growth in countries where advertising is a mature industry so mobile will also be monetized more quickly (places like the U.S., Japan, Germany, and U.K.) and also accessible (so not China). If growth takes off in less-mature ad markets, but sizeably populated countries such as India or Indonesia, find a local advertising partner with strong ties to large conglomerates and marketers in the region before committing resources.

So when Josh Elman, venture capitalist at Greylock Partners, blogs about getting meaning from growth numbers provided by startups, we should probably add users by region to the discussion for ad-supported consumer start-ups in order to better understand the real opportunity and value being created for investors.