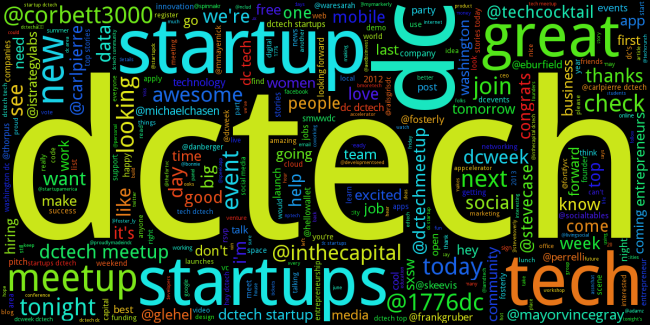 With it being that time of year again when ‘best of’ lists and predictions for the New Year get published I thought I’d take a hybrid approach in looking at the current state of the Washington, DC start-up community of which I’ve been a part of for the past dozen years. It was a web generation ago that the DC area, namely Northern Virginia, was considered an important technology hub thanks to the likes of AOL, which drove consumer adoption of the web, and UUNET, which built the underlying delivery infrastructure. Unfortunately there’s not much left to show from these early internet successes (just look at AOL’s former campus headquarters in Dulles, VA which mostly consists of Raytheon, a defense contractor, signage these days). If the DC region hopes to reestablish itself as an important tech ecosystem it needs a company, or two, to become anchors in the community that will not only draw technical talent to the region but also enable employees to leverage these companies to start new ventures of their own. So I put together a list of a few start-ups that could become one of these pillars.

Two caveats in putting this list together though (1) I excluded any company I’m directly or indirectly involved with (as an employee, investor, mentor, etc.) so as to remove any personal biases and avoid disclosing any non-public information. This meant that portfolio companies of NextGen Angels (where I am a member), for instance, were not considered (and anyway, how could I choose the best amongst all of my companies!) and (2) Advertising-supported businesses, like Vox Media, were also eliminated from consideration. The rationale for focusing this list on start-ups that build and sell technology rather than are just tech-enabled is the diversity of engineering talent needed to run these types of organizations, which are critical in sustaining a tech ecosystem, as well as their ability to build defensible businesses longer-term that are not as susceptible to changing consumer momentum and tastes.

So with these disclaimers out of the way, here are the 3 companies that laid the groundwork in 2013 to potentially become outsized success stories and reestablish the DC region as a major technology hub longer term:

FoundationDB In 2010 then Google CEO (and now Chairman) Eric Schmidt was famously quoted as saying that the amount of information created in 2 days at the time equaled all the information created between the dawn of civilization and 2003- and the pace of creation was only increasing. Even if Schmidt was wrong by a factor of 10 that’s still a lot of information that needs to be captured, stored and made available for retrieval. Add to this the complexity of handling disparate data types with varying rules around what information actually constitutes data and you have the reason for FoundationDB’s existence.

The company is developing a new type of core database that supports the modern day needs of web applications by storing and scaling data regardless of the data model being used (geospatial, graph, JSON, traditional, etc.). By combining the scale and distributed architecture of NoSQL databases (which the likes of MongoDB, which has raised over $220 million to date, have popularized) with the power of ACID transactions, FoundationDB is creating an industrial strength database technology similar to the one used by Google to run AdWords. Having started out building its core features to support NoSQL, the company acquired Akiban, another database start-up that used the same abstraction FoundationDB’s substrate uses but for SQL, earlier this year giving the combined entity a unique hybrid solution. The company’s 4-year effort in building a fault-tolerant system was rewarded last month with a $17 million Series A investment, bringing FoundationDB’s total funding to $23 million.

MapBox Apple’s launch of the App Store in 2008 ushered in the era of computing and with it the importance of location in adding context to mobile application experiences. One of the simplest ways to provide location-based information is via maps- and that’s where MapBox’s technology comes into play.

The company provides cloud-based tools for developers to add interactive maps to their web and mobile applications by leveraging OpenStreetMap data (an open-source project which MapBox also contributes to). Even though the company competes with the likes of Google Maps and ESRI it counts Evernote, Foursquare GitHub, Hipmunk and Uber among its 2,500 paying customers. Due to this early success, MapBox was able to raise a $10 million Series A in October to expand its offering.  That’s because location data is just the starting point of potential for the company as it looks to partner with other data providers to incorporate other types of content to its map offering which would allow it to apply other, relevant, contextual signals that developers could use to enhance the capabilities and user experience of their apps.

SmartThings The “internet of things” promises to move the internet beyond just computing devices to include everyday devices such as door locks and thermostats. By 2018 it’s estimated that there will be 9 billion such devices connected to the internet- roughly equal to the number of smartphones, smart TVs, tablets, wearable computers and PCs combined. So it’s no surprise that DC-based SmartThings is tackling this huge market opportunity. The company, which raised a $12.5 million Series A last month bringing its total funding to $15.5 million since its founding, started out as a Kickstarter project in 2012. Since then SmartThings has launched its own online store to promote its ‘Smart Hub’ which allows consumers to connect various packages of sensors and devices to the internet to solve specific problems.

While the company faces competition from the likes of Nest (founded by ex-Apple employees that are building a vertically integrated solution) and Revolv (which launched its own hub that connects to existing connected devices but lets people create their own notifications) its biggest threat might come from their market timing of consumer understanding and adoption of these types of solutions.

So is this list perfect? No. Could I be dead wrong? Absolutely. But the fact that these companies touch on early-stage and fast-growing technology market opportunities gives me hope for their success. All they have to do now is execute.