The most interesting theme to emerge from all the announcements at CES last month was that of the automobile becoming an app platform. The Big Three all released information about their respective efforts towards this, ranging from Chrysler enabling internet radio apps to stream on its Uconnect system to Ford and GM both announcing app development programs for their respective in-car software platforms. Not to be outdone some of the leading consumer mobile tech companies also provided updates on their continued integration efforts with the automobile manufacturers including: Pandora naming Chrysler as its 20th auto brand partner and Hyundia and Kia joining 3 other car companies in working with Google to integrate Maps capabilities into their respective car connectivity systems. Add to this the recent announcements regarding the incorporation of Siri Eyes Free into specific Acura, Honda and Chevrolet models following Apple’s announcement of this initiative last year, the availability of Amazon’s Cloud Player in select Ford vehicles and Facebook’s hiring of a Head of Automotive, you can see why the next great battleground for audience attention is taking place right behind the steering wheel.

And why not? The automobile is the last physical space where Americans spend an inordinate amount of time (18 ½ hours on average per week according to a 2009 Arbitron national in-car study) that hasn’t been infiltrated by the internet. With time spent in cars continuing to rise (an average increase of 31% for weekday driving since 2003 according to the same study) the opportunity to replace the current analog automobile experience with apps is only getting bigger.

The in-car digital experience will differ from how we currently interact with apps and the greater web on desktop and mobile computing devices in one dramatic way- the user interface. Since driving requires focus on the road, hands-free controls to both navigate and consume content will be the default setting in automobiles. With Apple’s Siri-based iPhones and Microsoft’s Xbox having become mainstream consumer devices at this point, the learning curve for performing voice-activated commands won’t be an issue. Instead, the limitation will be on the content side where audiobooks, internet radio, music, podcasts and voice navigation systems are the only categories already in a format that can leverage this opportunity, leaving text-based media to be adapted in order to participate. This creates a new market for speech and text conversion technologies like Nuance to be the provider of voice navigation controls at the automotive platform level or apps like iSpeech that convert articles and books from text to speech.

Not surprisingly, local radio station owners and navigation system manufacturers are the most likely to be disrupted in this evolution. Without the technical limitations of terrestrial radio signals, consumers will be able to access local programming from anywhere in the country through apps like iHeartRadio or national programming without any additional in-car hardware from SiriusXM Radio. Subscribers will also have the ability to create their own music stations via Pandora or listen to the exactly what they want using apps such as Spotify. As audio consumption continued to increase online, so to will the allocation of local ad dollars as marketers will have access to audience-related metrics that aren’t available through traditional radio including actual listener numbers, not estimates, and the ability to target ads to the zip code, not just the station.

From the perspective of navigation systems, apps like Google Maps and Waze will continue to take the place of built-in and after-market navigation devices with their ability to provide current mapping data and crowd-sourced traffic updates via their respective networks. This is a much more compelling solution than paying the auto manufacturer to send you a CD every year just to update the in-car mapping data (which is my car’s case).

Pandora Media has the potential to be a big winner in the digitalization of the automobile experience but not for the expected reasons.  Pandora’s viability as an internet radio service has been questioned because of the cost structure challenges presented by the music industry. But with more than 1,000 partner integrations, including 85 vehicle models and 175 aftermarket automotive devices, Pandora could evolve into a platform service, much like Amazon did with Web Services, that would allow other developers to leverage these automobile-related hardware integrations to allow their apps to connect with vehicles and related devices as well. 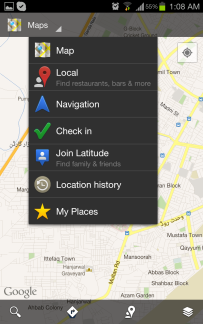 No matter how the battle for the next digital screen plays out, Google is one of the best positioned companies because of its existing portfolio of technologies. With Google Maps slowly getting integrated into various vehicles experiences, Google will have its Trojan Horse for offering up services beyond just mapping and traffic data. By looking at the additional data layers offered in Google Maps you get a picture of this: Navigation provides turn-by-turn directions, Local identifies nearby retail establishments, Latitude find people you know that are physically near you and History stores information on the places you’ve been. This provides Google with contextual data around where you go and with whom which can feed newer services like Google Now, which uses machine learning to predict the information you might be interested in (like when to leave for a meeting, activities you could do nearby or sports schedules for your favorite teams), to enhance the user experience across all screens. Add to this Google’s quickly improving natural language capabilities for voice commands and Android-based in-car app platforms being developed by the likes of Harman, one of the largest suppliers of in-car technology, and you can see why Google is so well-positioned to dominate the in-car content experience going forward. Either by consumers using its apps, or better yet by automotive-related manufacturers using its mobile operating system to enable apps, Google will continue to capture an increasing amount of data on consumers, which in turn makes its services smarter and more useful to people, which brings more users to Google’s platform in a self-fulfilling cycle. If all else fails, Google could simply provide the driverless car technology it has been testing and own the entire digital automotive experience itself.

With over 105 million solo drivers on the road in the U.S. the digital dashboard opportunity goes beyond just enabling subscribers to consume more information and have access to better in-car utilities. It also creates an opportunity to give advertisers access to a very targeted, but maybe more importantly, captive audience. By marrying registration and demographic data of the driver with their current location, via GPS, along with intended destination, via maps and navigation, content providers and advertisers will be able to incorporate much better audio ads, using real-time ad-insertion technology, and digital offers than ever before. And because of the linear nature of consuming audio content, advertisers should expect a better return on their marketing expenses because drivers won’t be distracted by anything else.

It’s reasonable to believe that we will see the fruition of these early in-car efforts over the next 2 to 4 years. Now imagine 2020, when the first driver-less cars are expected to hit showrooms (although if Google had its way, it would happen sooner). The experience of driving a car will become obsolete and everyone will become a passenger so the content consumption and advertising-related opportunities will expand as former-drivers can focus on other activities in earnest turning the car into a portable living room.

Maybe then Bill Gates’ famous quote comparing the computer and auto industries, and subsequent rebuttal from GM, might actually have some truth to it.

One thought on “Automobiles: The Ultimate App Machine?”